Could Your Race Affect Your Criminal Defense Case?

Home Blog Could Your Race Affect Your Criminal Defense Case?
201408.16 0
in Blog

When it comes to the outcome of a court case, many factors come into play, from the nature of the crime to the mood of the court. However, without the best defense, the verdict could be out of a defendant’s control. According to a recent study conducted by Cyrus Vance, the district attorney for Manhattan in New York City, a prosecutor’s persistence might not be the sole influence on the judgment of some cases; they could be influenced by the defendant’s race.

With the help of the Vera Institute for Justice, Vance opened more than 220,000 records that had come through his office between 2010 and 2011 to determine if the cases’ verdicts were affected by disparate factors. Although the researchers found that the cases’ outcomes were influenced by a number of things, race had a measurable impact on the collected data. The Vera Institute reported that, of the cases, blacks were 19 percent more likely to be offered plea deals that required jail time for marijuana-related misdemeanors. They also found that courts were 19 percent more likely to offer plea bargains that included time behind bars to blacks than whites. For misdemeanor person and drug offenses, blacks and Latinos saw more jail time before their arraignment, and blacks were 15 percent more likely to receive a verdict that involved imprisonment. Other statistics calculated throughout the study also suggested a racial disparity in case outcomes, but the researchers ultimately could not pinpoint a reason for these discriminatory results.

The researchers may not have been able to determine the cause for racial disparity between the cases, but Khalil Gibran Muhammad, the director for the Schomburg Center for Research in Black Culture in Harlem, New York, maintained that the skewed results could reflect the higher number of crimes charged against blacks and Latinos. In an article by the New York Times, Muhammad said that approximately 8 out of the 10 of defendants in the study’s cases were black and Latino—a problem that starts with police officers, not prosecutors.

Is There a Racial Bias in Criminal Sentencing?

Justice is supposed to be blind, but unfortunately in reality this is not necessarily the case. A recent analysis by the US Sentencing Commission found that prison sentences of black men were nearly 20% longer than those given to white men for similar crimes. Also, black men are 25% less likely to receive a sentence below the range of the federal sentencing guidelines.

This gap has widened since 2005 when the Supreme Court restored judicial discretion in sentencing, which allows judges to exercise their own judgment to a greater degree when determining prison sentences instead of following federal sentencing guidelines. However, the report also emphasizes that judges take into consideration many factors that are not necessarily made known to the general public and cannot always be objectively quantified.

Often times, the key factor comes down to the strength of your legal representation.

Racial bias continues to be a hot topic in the news. The problem looms large in law enforcement and the legal profession: studies show that black men are more likely to be stopped when driving, searched for drugs or other illegal items, and police are even more likely to shoot at an unarmed black suspect than an unarmed white suspect. In legal cases, it’s often argued that racial bias against people of color leads to their being convicted more often than white people who commit the same crimes.

In a recent challenge issued by the University of Virginia, scientists were charged with the task of finding effective ways to eliminate racial bias in five minutes or less. One group of researchers in particular reported some surprising results. The team found that educating individuals about racial discrimination and trying to get them to sympathize was completely ineffective. However, showing counter-stereotypical words, messages, and images proved to be quite effective, at least temporarily. In other words, the researchers showed subjects images and words that portray the exact opposite of the common stereotypes. So, if a minority group is commonly associated with “bad,” subjects were provided with material associating these minority groups with “good.” 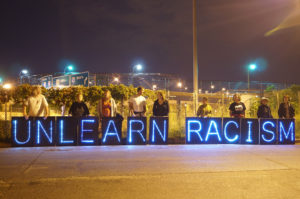 Researchers theorize that this temporary effect works the same way as when we form our biases to begin with: we see a certain group of people behaving in a certain way, and over time we begin to expect all members of that group to follow the same pattern of behavior. By that logic, it seems possible that over time we could re-train our brains to get rid of our racial biases once and for all.