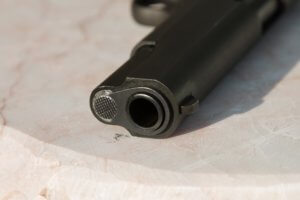 If you are a felon and have been charged with possession of a firearm or you were accused of selling guns to a felon, you need an experienced criminal defense attorney to represent you. With nearly three decades of experience in criminal law, Gabriel L. Grasso is considered one of the top federal criminal defense lawyers in Las Vegas.

As such, he has successfully represented a variety of individuals ranging from celebrities and local politicians to The Rollin’ 60’s Crips and The Hells Angels. While he is no stranger to high-profile cases, he is also dedicated to helping individuals residing in the Las Vegas area who have been charged with a crime.

An individual who sells or disposes of ammunition or a firearm to another with knowledge of, or having reason to believe that the individual receiving these items: is a fugitive; has been convicted of a felony; is under indictment; is suffering from some type of mental health condition; abuses a controlled substance; has a previous conviction for a misdemeanor crime of domestic violence; is subject to a court order that prohibits the individual from stalking, harassing or threatening a child, or intimate partner; has surrendered his or her American citizenship; is an illegal alien or admitted into the U.S. under a non-immigrant visa; or was dishonorably discharged from a branch of the Armed Forces, violates the law according to 18 USC § 922 (d).

Banned classes include: fugitives, convicted felons, illegal aliens, individuals with adjudicated mental defectives, those who were dishonorably discharged from the armed services, individuals who have surrendered their American citizenship, an individual who has a previous conviction for a misdemeanor crime of domestic violence, one who is subject to a court order that prohibits the individual from stalking, harassing or threatening a child, or intimate partner, and/or an unlawful user of controlled substances.

According to 18 USC § 924(c), anyone who carries or uses a firearm while drug trafficking or committing a violent crime will receive a fixed prison term (on top of the punishment for the crime of drug trafficking or violence). The mandatory minimum for the basic offense is 5 years; 7 years if the firearm is brandished; 10 years if the firearm is discharged; if the firearm is a shotgun, semi automatic assault weapon or short-barreled rifle, 10 years; 30 years for a firearm that is equipped with a silencer, any type of destructive device or a machine gun; and 25 years for any additional convictions under this section. However, if a machine gun, etc., is the firearm used or carried during the additional convictions, the punishment is life imprisonment without release.

Each of these penalties is consecutive to the other sentences, including the sentence for the underlying offense.

In the event that a prohibited person possesses more than one firearm, or a firearm and ammunition, the majority of courts consider this one conviction under 18 USC § 922(g). However, there are exceptions to this rule. For example, if evidence shows that the prohibited person did not obtain the weapons at the same time or stored them in different places, he or she could receive multiple convictions. Even so, that is not to say that he or she will be convicted and punished for more than one offense. Instead, during sentencing, the district court may choose to merge the conviction counts that it considers duplicative.

Being charged with a federal crime is difficult to contend with, and not having a good criminal defense lawyer to work beside you as you move through the legal system could lead to a disastrous result. With an experienced criminal defense lawyer, your chances of winning your case or receiving a reduced sentence increases substantially.

Attorney Gabriel L. Grasso represents individuals residing in Las Vegas and its surrounding communities. As your criminal defense lawyer, Attorney Grasso knows that he is not only fighting to ensure your rights are protected, but also for your loved ones, your reputation and even your future employment opportunities. Contact Attorney Gabriel L. Grasso's office today at 702-868-8866 or 1-855-LAWRUP to schedule your criminal defense attorney free consultation. Attorney Grasso's office is located at 411 South 6th Street, Las Vegas NV, 89101.